Cornwall’s dramatic coastline is arguably one of its most alluring features. From the breathtaking cliff-top vistas and long stretches of sandy beach to the uncompromising wild, crashing waves of winter. There’s something about Cornwall’s coastline that is unique and captivating.

Defending Cornwall’s coastline was hugely important in the centuries past. So important, in fact, that there were many castles built along the coast at various key points. Today, many of these castles in Cornwall are owned or managed by organisation such as the National Trust or English Heritage and have been wonderfully preserved – so you can step back in time and imagine life during when they played such an important role in the county and for the country.
If you’re planning a stay at our holiday park in Cornwall and are looking for a great day out then read our guide below and spend the day visiting some of these historic buildings.

Head up the north coast of Cornwall and you won’t be disappointed! Tintagel Castle is a place steeped in legend and mystery. Whether you’re a believe or not, it is said to be the birthplace of King Arthur and you can still visit nearby Merlin’s Cave. The castle also features in the tale of Tristan and Isolde. With a history stretching as far back as the Romans, Tintagel Castle is one of the most iconic visitor attractions in the south west. Check out the great video below…

Perched on the tip of the Roseland Peninsula is St Mawes Castle. It is among the best-preserved of Henry VIII’s coastal artillery fortresses, and the most elaborately decorated of them all.

One of the chain of forts built between 1539 and 1545 to counter an invasion threat from Catholic France and Spain, it guarded the important anchorage of Carrick Roads, sharing the task with Pendennis Castle on the other side of the Fal estuary.

Leading neatly on from St Mawes Castle is Pendennis. As described above a giant chain linked these two castles in Cornwall. The chain spanned across the open sea to stop vessels making their way into the port of Falmouth. The castle was one of the many mighty fortresses built by Henry VIII and has seen action in many conflicts and was one of the last royalist strongholds to fall during the English Civil War.

Just outside the pretty town of Lostwithiel is Restormel Castle. Tucked away on the hillside, you could easily drive past this without noticing it – but that doesn’t mean it should be overlooked.

The great 13th-century circular shell-keep of Restormel still encloses the principal rooms of the castle in remarkably good condition. It stands on an earlier Norman mound surrounded by a deep dry ditch, atop a high spur beside the River Fowey. Twice visited by the Black Prince, it finally saw action during the Civil War in 1644. It commands fantastic views and is a favourite picnic spot.

Stroll across the granite causeway where a legendary giant once walked and follow the footsteps of pilgrims. Boat hop to an island where modern life meets layers of history, discover a medieval castle, a sub-tropical paradise and a close-knit island community. Delve into the history of a fortress, a priory, a harbour and a home. 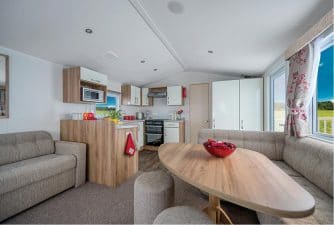 See it all from Tehidy…

Our location in central Cornwall means you can easily visit these popular tourist attractions, without having to venture too far!

Whatever your preference may be, we’ve got something for you! We’re a popular choice for caravan holidays in Cornwall but also have a lovely collection of cosy holiday cottages, glamping pods and touring and camping pitches.