The ancient history surrounding Tehidy Holiday Park in Cornwall. Carn Brea ridge and monument can easily be seen as you drive down the A30 towards Redruth. The ridge itself is worth a visit. It looks like giants have been playing skittles with massive boulders that are scattered around the hill top. Our children love to find animal shapes in the rocks. One is called ‘Shark Rock’ can you find which one it is? Another man made thing to look out for is the carvings in the stones. Some have a set of hollows in them and are probably the remains of ‘early board games’. The ridge has been a site of human activity dating back to the neolithic times. The landscape would have been covered in dense forest with most population on or near the coast where travel would have been easier. As the forests disappeared, in the bronze age, more settlements appeared inland. Chysaucster is a lovely example of this. The Cornish Peninsula is thought to have the largest concentration of settlements dating to this period of anywhere in Europe.

The picture is taken looking over old tin works which are on the beautiful ‘Great Flat Lode’ mining heritage cycle trail which circles Carn Brea. 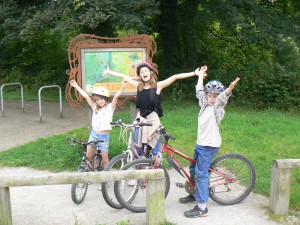